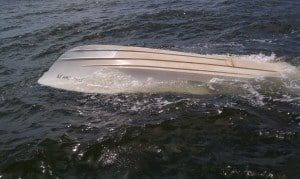 Good morning to Captain and Crew alike and welcome to another edition of the Admiralty Docket.  As this unusually cold winter comes to an end and the weather allows more people to get out on the water in South Carolina, a few words about recreational boating safety – and specifically marine VHF radios – are in order.

A hundred or so years ago, when your Charleston Maritime Attorneys were just wee lads, there were few options for ship to shore communications, especially for smaller vessels. We just shouted and hoped that someone could hear us. Now, however, there are a myriad of choices when it comes to recreational marine communications devices, including relatively inexpensive waterproof, durable, handheld and shelf-mounted VHF radios. With the proliferation of cell phones in recent years, however, many owners of smaller vessels have  foregone the purchase of marine radios.

A couple of weekends ago, when yours truly was taking a rare but well deserved break from the office to enjoy a day of fishing offshore of Charleston, I was reminded of several reasons that cell phones are not adequate substitutes for marine radios:

The Admiralty Docket is a blog written by Charleston, SC Maritime Attorneys John Hughes Cooper and John Townsend Cooper which focuses on maritime legal issues and current events in South Carolina and the Southeastern United States.

If you would like a free, confidential consultation with an attorney at our firm, or if you need assistance in finding the right attorney for your case, please fill out this form below:

What Laws Apply to Injuries to Passengers on a Ship or Boat?