Good morning to Captain and crew alike and welcome to the Admiralty Docket. This is John Hughes Cooper with a 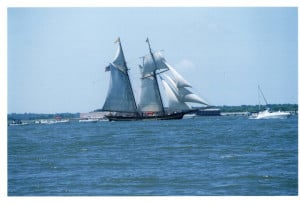 glimpse into your rights and responsibilities at sea and upon the navigable waters.

Today our subject is Peter Pan and Captain Hook in the special maritime and territorial jurisdiction of the United States.

The story of Peter Pan is a treasure for serious students of the admiralty. In every version of the story, Peter Pan takes young Wendy and flies off to imaginary Neverland to sword fight with the pirate Captain Hook. As the story goes, Peter Pan cuts Captain Hook’s hand off and feeds the severed hand to a crocodile.

Wendy and her siblings are very British, as likely is Captain Hook. Although Peter Pan’s nationality has never previously been disclosed, I now have it from the most reliable source that Peter was in fact a U. S. citizen. Not the Department of State, not the Central Intelligence Agency, no . . . my 3 year old son, Charles Robert, who has read the story in numerous books and seen at least four popular movie versions confirms Charleston County as the true birthplace of Peter Pan.

Title 18 of the United States Code defines conduct which constitutes federal crime and prohibits such conduct. Of the federal crimes detailed, a number are within the admiralty jurisdiction of the U. S. District Courts. The list includes much of the recorded conduct of Peter Pan and Captain Hook, including theft of vessels, mutiny, abandonment of sailors, arson, murder, piracy under the law of nations, assault on the commander of a vessel, conversion of a vessel, confederating with pirates, receipt of pirate property, and more.

One interesting aspect of these admiralty crimes is that the prohibited conduct must be committed within a geographical area known as “the special maritime and territorial jurisdiction of the United States.” If one commits the conduct outside this area, the conduct is not a federal admiralty crime.

So far, no Peter Pan. Then § 7 includes certain islands, rocks, or keys containing guano. The story does not record whether Captain Hook left any guano around when Peter Pan cut his hand off. Then § 7 includes United States aircraft while in flight over the high seas outside state waters. Peter Pan does fly through the air, but does not seem to be an aircraft.

Then § 7 includes within the special maritime and territorial jurisdiction any U. S. vehicle used or designed for flight or navigation in space, while that vehicle is in flight. Even though one movie version of the story has Peter Pan steering Captain Hook’s sailing ship past the moon, Hook’s ship is not a U. S. vehicle.

Is My Wave Runner, Paddle Board, or Jon Boat a “Vessel”; Under the Maritime Law ?