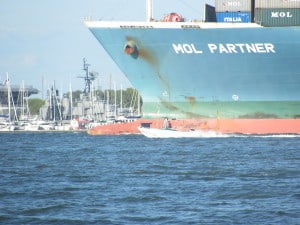 Good morning to Captain and crew alike and welcome to the Admiralty Docket. This is John Hughes Cooper with a glimpse into your rights and responsibilities at sea and upon the navigable waters.

Today our subject is the maritime law of collision.

The vast oceans are so large that even the largest of the supertankers are by comparison mere specks of dust. Consequently, the inexperienced often think maritime collisions a rare event.

However, a cursory review of reported American Maritime Cases, reveals the many collisions which find their way into our admiralty courts. Ships steam night or day, in all weather, regularly in narrow channels or harbors and their momentum under way, slow response to steerage, and limited stopping capabilities require constant vigilance and proper and timely action on the part of her master, officers, and crew to avoid collision.

Liability for collision under the admiralty law is based upon fault. The fact of impact between two vessels has no legal consequence. The concept of fault presupposes a standard of correct conduct, and any deviation from the required standard will likely result in a finding of fault. The standard of correct conduct in navigation of vessels from the largest merchant ships down to the smallest pleasure boats is supplied primarily by the federal statutory Rules of Navigation. There are four sets of these so called “Rules of the Road” in force, each of which applies to different waters. Every officer and every vessel operator is held by the law to strict adherence to the applicable Rules. The International Rules apply to navigation of vessels on the high seas. The Great Lakes Rules apply on those waters, the Western Rivers Rules apply primarily on the Mississippi and its tributaries, and the Inland Rules apply to regulate navigation on all other navigable waters in the United States including seaports, bays, rivers, harbors, channels, inland lakes, and all other waterways.

Under the precedent adopted by the U.S. Supreme Court in the case of The PENNSYLVANIA, a vessel guilty of statutory fault or violation of the Rules of the Road before a collision, must show that such fault or violation could not have contributed to causing the collision. This heavy presumption has not often been rebutted and the PENNSYLVANIA Rule as it is called makes especially important the strictest compliance with the Rules of the Road.

A narrow exception to the enforcement of strict compliance with the Rules of the Road and with the standards of prudent navigation involves errors committed in extremis. When a vessel, through no fault of her own, is placed in a position where collision is seemingly imminent, she will not be found at fault for violation of the Rules if the violation is justified by the emergency situation in which she is placed. However, it is seldom easy to explain how one gets into an imminent collision situation through no fault of her own. More often vessels find each other on the vast surface of the ocean and some small lack of vigilance on the part of one or both brings enormous property damage, sometimes death or serious injury, and often environmental consequences. This brings to mind the comment of the old mountaineer upon first seeing the Atlantic ocean after hearing about it all his life, “After all that talk … I thought she’d be a lot bigger than that.”

If you have a question involving admiralty or maritime law, call Cooper and Bilbrey, P.C.  at 843-883-9099 or email us for a free, confidential consultation with no obligation.

Cruise Terminal Permit Back to the Drawing Board